Today, the current king of my collection arrived, a Bell & Howell Apple ][+, notable both because it’s quite rare, and because it was really “my first” computer. I never owned one, although this is what I started using at school when I was in 6th grade, and they even let me borrow it over that following summer, while school was not in session.

The Bell & Howell model is mostly just an Apple ][+ that was painted black and was marketed exclusively to schools by Bell & Howell. Inside, it is mostly just an unremarkable Apple ][+. Some proportion of these came with a “backpack,” which provides additional power outlets and some audio and video ports, and which fits onto to the back. Mine has the backpack, making it even a little bit more rare (and also a little bit more worth having, since with this it is something more than just a differently-colored Apple ][+).

Facing it from the back, we have, on the left, the audio and video inputs and outputs. These didn’t really add any particular additional capabilities to the computer, except that it allows for mixing in (mono) audio from the computer and two other sources, each of which is controlled by a separate volume knob, and can be sent to a speaker or headphones through a 1/4″ phono jack. It also provides pass-through ports for the cassette in and out ports on the Apple, and, somewhat inconveniently, BNC video connectors for the video out, which have been multiplied so you can send the video to two different monitors simultaneously.

On the right, there is essentially a glorified power strip (with a fuse), containing three power outlets (into which you could plug, say, the monitor, or an overhead projector) on a separate switch from the computer. In the upper left corner is the access screw; this passes through the backpack into a hole in the computer’s lid, so that when it is screwed in, you can’t remove the top. That was necessary in order for this to be certified properly for use in schools and marketing by Bell & Howell, to discourage operation of the computer while the case was open.

The other change is that there is a game I/O port on the side. I somehow didn’t take a picture of this on mine yet, but it looks like the picture below. This is supposed to be a good thing because the normal game controllers for the Apple ][ had fragile 16-pin connectors that were pretty easy to break. So, the idea here is that this is a much sturdier place to plug them in. The problem is, now, I don’t know where I could find any game devices to plug in there. I don’t know what uses that type of connector. It is still in principle possible to plug in regular game devices inside the machine, though, if you disconnect this external port.

My particular computer is in pretty decent shape, for the most part. The paint is not too chipped. It was a little bit dirty, and in my efforts to clean off some of it, I may have rubbed off some of the texture on the lid in a way that might be noticeable from close up (which I am not pleased about), but overall, it looks quite good (particularly in comparison to some that have gone by on eBay recently). It’s still going to be a little bit of a fixer-upper, but getting the innards working is something I think I can handle, there would have been no helping the paint if it didn’t look good. So I’m glad that it looks as good as it does.

When it arrived, it had suffered some key detachment during shipping. My initial horror at seeing this subsided a bit when, upon inspection, none of the key stems appeared to have been damaged, and all of the keys were unscathed and present. Had there been damage, I would have been up the creek, because finding replacement keys would be nearly impossible.

Out of the packaging and a little bit more organized, we have the machine pictured below. (I don’t know what that little yellow cylinder is, but there was another one that fell out of the case when I opened it up as well. So I have two of them, and they must have come from somewhere. I’m not sure I’ll ever know where, though.)

The machine also has lost three of its four feet somewhere along the line, but I plan to get replacement feet and go ahead and put them on myself.

One thing that I am not too happy about is that the stickers have been disturbed. Here are the many stickers from the bottom of the machine.

In particular, the official Bell & Howell sticker has been peeled back some part of the way. (Why would anyone DO that??) It does appear that after an initial attempt to get the sticker off from the edges, it was abandoned, so it’s still mostly intact, but it is kind of a mess. However, it does reveal that there is a fairly standard Apple sticker behind it, you can make out the “inc.” of “apple computer inc.” in the upper right corner, and a little bit of the “MADE IN U.S.A” notation underneath the word “microcomputer” on the Bell & Howell sticker, and the “listed” of “UL listed”. And what I expect is a model number checkbox, which probably reads “A2S3048” (corresponding to the Bell & Howell model number 3048D). Ultimately, I don’t know what the serial number of this machine should properly be. It’s either Apple’s A2S3-011472, or Bell & Howell’s 1278033, although probably the Apple serial number is the one of more consequence.

For completeness, too, here’s the board date, indicating, I think, an August, 1981, assembly. This board date is not like any I’ve seen before. It seems to read “D 8133” and I don’t know what the “D” refers to. It’s also, like the terrarium ][+, not in week-year order. I still haven’t quite managed to figure out these handwritten ones. Nearly every one I’ve seen starts with “80”, and this one starts with “81”, so it seems a reasonable bet that this represents the year. I’d guess that the second two digits represent the week, except that the “Apple ][” on display at myoldcomputers.com has “8068” on it, which can’t represent a week. It doesn’t seem likely that it is a sequential serial number (since all that I’ve seen start with “80” or “81”), but what it is I don’t know. Perhaps the “8068” is really just a sloppily written “8008”, in which case it’s just year-week, but it really doesn’t look like that. Maybe someday I’ll come across somebody who knows what these mean.)

There are a couple of things I need to address with this computer before I actually try to fire it up. One thing that makes me a little bit jittery is the fact that the power cord is frayed near the plug (and this, incidentally, is one absurdly long power cord. I actually haven’t explored how it connects to the backpack, I may be able to just replace it. This fray may not be serious, but it looks like a fire hazard.)

The other thing is that it’s just kind of dirty. So, as with the other computers destined for my office, I disassembled it so that I could clean the keys individually and blow out the inside of the keyboard. One thing about this computer, though, is that it has so many doodads connected to bits of the case and the backpack that it’s a little bit hard to get apart. The backpack plugs into the built-in AV ports in the back with plugs that lead out of the backpack on the inside, and the power is brought to the power supply through three individual wires that attach to the pins in the power supply plug receptacle. I’m not looking forward to reattaching those. 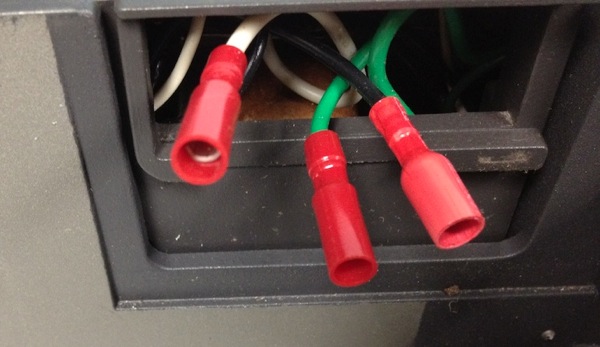 The little grey-white-red wire takes the sound output of the motherboard back to the backpack (grey-red), and then the white wires bring it back to the built-in speaker, routed through an anchor on the side of the case. I assume that this is so that the volume control in the back can control the sound output of the built-in speaker as well (and probably also cut out the built-in speaker when headphones are plugged in). There is also an orange wire routed through that same attachment in the side of the case that connects to the game port and to the keyboard, which I assume is a shift-key mod. The PCB on the side is the interface to the external game I/O connectors, which plugs into the game port on the motherboard. I was able to unplug nearly everything, but the keyboard is still attached to the case due to the shift-key mod (which appears to actually be soldered onto the keyboard and onto the side PCB!), and the motherboard is still attached to the case due to the speaker wire, which doesn’t appear to be easily unpluggable. So, it is going to be a bit clumsy to clean this out, since everything has to pretty much stay together. And if any of these wires ever needs to be replaced, it will be a pain.

One thing that makes me sad about this is that the person who sold it decided to part it out, and so the black Disk ][ drive that goes with this didn’t end up going to me. The auction for the drive and the auction for the computer ended at the same second, and so it was impossible to go bid high on the drive once I’d ensured that I’d gotten the computer. So, somewhere out there, someone has a black drive without the black Apple, and I meanwhile have a black Apple without any black drives. I think it is very unlikely that I’ll ever be able to get one, except if I were to buy a second Bell & Howell Apple ][+ that comes with two black drives. And that’s not likely to happen. Here, though is what it would have looked like if I’d had one. (The normal beige drives of course work just fine, they just aren’t color-matched.)

The next steps, then, will be cleaning everything up and reassembling it, possibly replacing that power cord, installing some beige drives (of which I don’t really have a shortage), and making it go. I’ll probably need to get a BNC adapter (to convert the video back from BNC so I can use a composite monitor), but otherwise that’s about it. I have some black paddles coming as well, though they won’t plug into the side ports (I’ll have to plug them into the standard internal port).

But, this may mark the end of the acquisitions phase for a while now. I did pay quite a bit to win this auction, it’s true—but it’s hard to know how I fared because the prices have been all over the map in the few months I’ve been watching. I paid more for this than some have recently gone for, and quite a lot less than some others have gone for. Some of those had the backpack, some didn’t; some had drives, some didn’t. I think I probably did ok given the current climate, and I wound up with a machine that is aesthetically in better shape than a lot of the eBay offerings have been. But it was still a significant purchase, and enough to cool my enthusiasm a bit for future bidding. Probably more importantly, with this, I’ve now got the things I have been most interested in acquiring. Though I’d kind of like to get a Lisa and an Apple ///, both tend to be hopelessly expensive, and both would be major hassles to get running and keep running. So, I’m probably just going to stick here. Time will tell.