So, the Lisa starts up with an I/O board error, number 52. According to my list of errors, this is an “I/O COPS error” which might have as its solution a replacement of the COPS chip.

There are a couple of other possible problems that could cause this I think. It could be due to a problem with the keyboard or the mouse. I just recently got an appropriate mouse and plugged it in, but that didn’t change anything. Still got error 52. I’m hoping that if the keyboard were at fault I’d get error 53 instead, but the keyboard for this Lisa is in relatively bad shape.

So, I decided I’d take out the I/O board again and see what I could see. Here is the COPS chip, nothing looked particularly wrong, except maybe that it was kind of out of focus. But I figured just for the heck of it, I’d pull it out and reseat it.

So, out it came, and—well, that’s not right. One of its pins had not been in the socket, but had been bent up underneath. This problem wasn’t really visible when the chip was seated, but it was pretty obvious when the chip came out.

I carefully bent the pin back to straight and put it back in its socket, this time with all pins reporting for duty. The pin I bent back is still bowed out a little bit but is in the socket.

Lisa then reassembled, I plugged it in again to try it out.

Well, ok, that didn’t help. Though I’m not sure that I trust that COP421 chip anymore, it’s possible that it needs to be replaced. One other thing I observe is that the upper right corner of the screen says “H”—this is strange, it is supposed to say “H/88” (or possibly “H/A8”) where the second number reports the floppy drive ROM version. But there’s nothing. Which suggests to me that this chip might also be a problem.

This is an EPROM, and so should have its window covered. There should have been a sticker over it. Here’s a picture of Mike Maginnis’ chip (cropped and hosted here), from his lovely album of the innards of one of his Mac XLs. Mine should have looked like that, and there is a risk that UV light might have gotten through the window and erased or partially erased that EPROM.

This is the ROM for the 400k disk drive, and is the ROM that should be reporting the “88” after the “H”, but as seen above, I’m getting just “H”. So, it isn’t crazy to think that this might be the source of a problem as well. One thing I’ve been advised to do but haven’t done yet is to clean the gold fingers on the I/O board, but I’ve taken it out and put it in several times now, so I kind of doubt that this would solve the problem by itself. I think what I’ll need to do is start by replacing both the COP421 chip and the Drive ROM. I’m not sure how easy it will be to get a COP421 chip, but the drive ROM is pretty easy and cheap to buy. So, that’s I guess where I’ll go next.

Followup, shortly after the initial posting: you know, there’s another problem. I’m pretty sure that’s quite simply not the right chip in the COPS socket. It’s the right size, but I do not think it is even a COPS chip. There’s a frighteningly detailed analysis of the Lisa COP421 on visual6502.org, where they refer to the chip as being “a difficult chip to replace” and being “a National Semiconductor COP421 from the ‘COPS’ family, customized for Apple.” The correct chip should be Apple 341-0064A, but this one says MM58167AN on it, which appears to be a clock chip. I’ve concluded that what I in fact have here is an Apple /// clock chip. Here is a picture from one of vintagemicro’s auctions [hosted here] for an official Apple /// clock upgrade, and it’s that very same chip that is included in the upgrade kit. 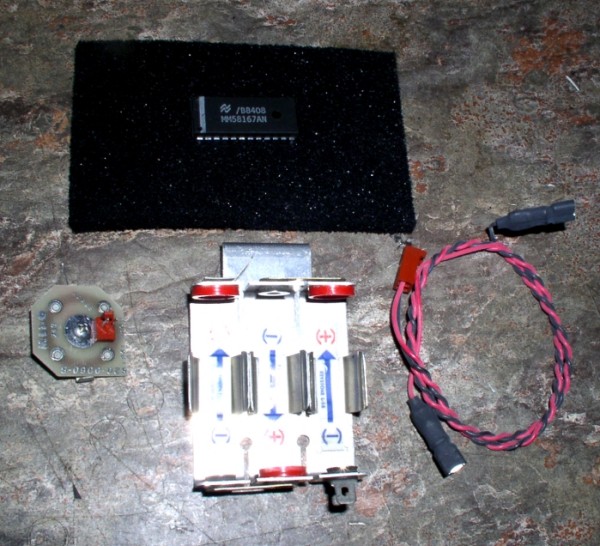 I can’t say what happened here, but I suspect that the COP421 chip failed and somebody attempted to replace it at some point with another chip that fits. I think the likelihood that the COP421 chip and this clock chip are functionally identical is about zero. So, there really is a serious problem with the COPS chip, and it might well be a serious problem for me, since I don’t know that I’m going to be able to replace this thing except by finding another Lisa I/O board. The hunt begins.

Posted in Uncategorized and tagged lisa.