Things that come from computer recyclers tend to be a little on the grimy side. So, I spent a little while cleaning up all five of the iMac G4s and checking to see if they worked.

A couple of them appear not to have hard drives in them. Really, none of them should have had hard drives in them (but I won’t reveal who it was who gave these to me, this was a bit of a data security lapse on their part). A couple weren’t properly wiped, but I’ll Do the Right Thing and wipe them myself.

I also got a couple of install disks, which happened to be in the drives (though they weren’t really appropriate—one had a PowerMac G4 disc, though this is an iMac, and another had a install disc for MacOS 9, into which most iMac G4s can’t boot). However, I was not able to start them up off the CDs, which I’m not that pleased about, I think they should have at least reached a “this machine is not compatible” screen. I didn’t investigate this, though, and I was at least able to read the disc on another machine that booted onto its own hard drive. But they all started up, at least to a blinking folder icon. So, they all work. 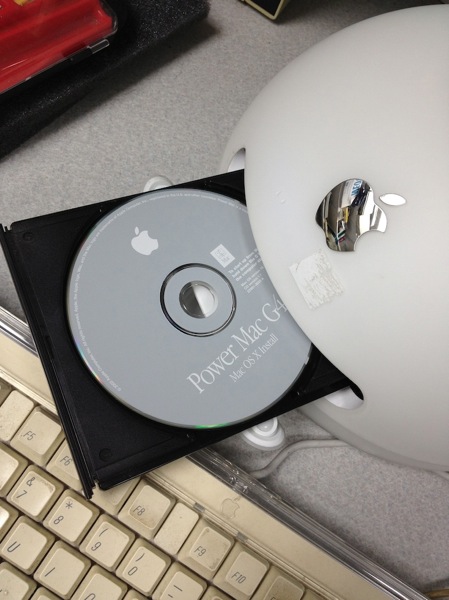 Though I still can’t quite see out what I’m going to sensibly do with six of these. I think it’s quite possible that I’ll clean them up a little more and install an appropriate blank system then see if somebody on ebay wants them. These are a little new to be properly “retro,” so I wouldn’t expect to turn much profit. Still, the main thing would be to put them in an appropriately appreciative home.

The nice thing about the iMac G4s is that you can squeeze them into pretty small spaces. Here are three of them sitting on my shelf (above a couple of iMac DV/SEs, a Bondi iMac, near a couple of SE/30s, and a couple of different generations of PowerMac).

All in all, I do think that I’d be wise to resist further urges to visit computer recyclers. This room is about at capacity now.