Having just learned a little more about how to identify old pieces (from parts of Tony Diaz’s retr0blasting talk from KFest 2010), I’m now seeing that in the pictures I have of the terrarium ][+, it is actually pretty old. I didn’t think the serial number looked that old. True, it was originally sold as a 16K machine. But now I don’t understand the serial numbers. This old one has an old sticker that says A2S2-1497165. My own Apple ][+ has a newer style sticker and a lower number, A2S2-542439. Yet I think there is no doubt at all that the terrarium ][+ is significantly older. 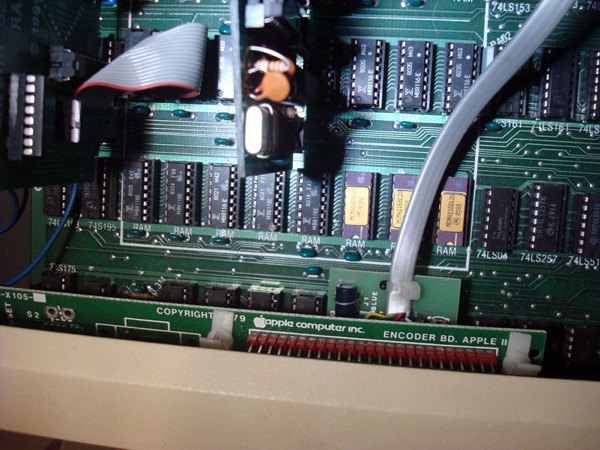 It also has 16K memory select chips in there, which my newer ][+ does not have.

The board indicates that it was assembled in December 1980, and the ROM D8 and ROM D0 were manufactured in mid-1980.

So, everything I can see from the limited photo set that I already have indicates that this is mostly as originally assembled in early December 1980, with the remaining RAM banks filled not long afterwards. According to the Apple II history site, the Apple ][+ ran from June, 1979, to December, 1982. The board date on my Apple ][+ is mid-November, 1982, which confirms my belief that my own Apple ][+ was one of the last ones made. And apparently, the terrarium ][+ was one of the early-middle ones.

I still don’t understand the serial numbers, that’s just weird. Maybe they started over (or started lower, anyway) when the model number switched from A2S1048 to A2S1048A?